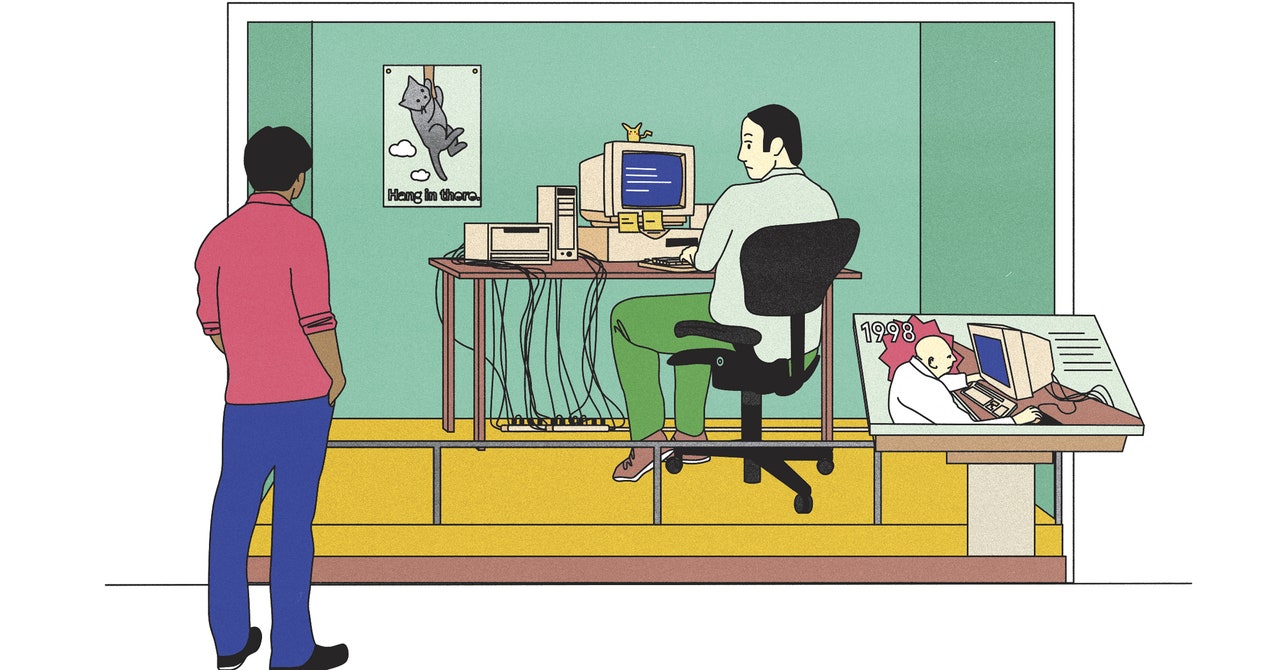 did you know You can now go to Archive.org for free, a great online library of all things, and load in your web browser an old, worn-out analog computer—a 1991 DOS box, a A black and white Mac, a green and black Apple II – running WordPerfect of yesteryear, booting up an old HyperCard stack, or God intended VisiCalc from 1979?

Maybe it’s not magic to you. Fair. Moore’s Law has taken us from 250 billion or so CPUs per year on the earliest Macs to 5 billion potential clock cycles on a good gaming PC, a healthy 4,000,000-fold increase. Any reasonable person can reasonably ask, What? Why use a shiny new computer to run an old spreadsheet? I may nod or shrug, but inside of me is a translucent plastic iMac full of emotion. Because I think imitation is important.

You can learn history by reading and visit the museum; You can even walk into battle. But you can’t understand software from screenshots any more than you can understand music from album reviews, or baseball from box sheet music, or Rome from watching gladiator movies, just as you might like gladiator movies. When you launch a virtual version of the Macintosh from 30 years ago, you’ll share the life experiences of millions of ancient humans. You can see how they fill a low-resolution screen with a paltry CPU budget.

You understand their priorities. They started batches, running programs as blocks of code, but they made them interactive and alive as long as the CPU allowed them. Even if those are just green numbers on the screen like VisiCalc. Early adopters started using the mouse to point to things as soon as possible—text, hieroglyphics—Spartan virtue was thrown away by Athenian excess. Later, in Moore’s excess, we spend new CPU cycles on color, network, or sound, from beeps to playing CDs to MP3s.

Simulation reminds me to ask myself if the calculation experience always getting better.I’m writing this in Google Docs so my editor’s little round avatar can peek, making sure I don’t miss my deadline once, but I will prefer Wrote it in WordPerfect 5.1 for DOS, the greatest word processor of all time – a blank screen with just letters and numbers, providing enough bold and italics to keep things interesting. I remember the WP51 like a non-nerd remembers a vintage Mustang. You can take that thing out and go, man.

But it’s not just a self-enriching museum trip. Simulation forced me to go back to basics – remember, for most people, computers are tools, not a way of life. Whenever I buy a computer, the first thing I do is set up my software emulation environment, which now involves about 1 TB of old disk images and various operating systems. Keeping this history so close helps me accept the horrific fact that all the novelties in our industry were actually invented by a bunch of Californians in bean bags during the Carter administration. What seems permanent today is as fleeting as Twitter’s fleet. GAFA becomes FAANG becomes MAMAA. There will be new acronyms soon.

Recently, I did The jump from software-based emulation to dedicated hardware.I bought a small black metal box, the size of three playing cards, that contained so-called
Field Programmable Gate Arrays – Variant circuits with other device characteristics.Purely for emulation of retro machines, including Commodore Amiga and 64, Atari ST, 486, and various gaming platforms, the main thing for most people (Neo Geos, Game Boys, Atari Lynx, all the way back Space war! on the PDP-1).

The box is called MiSTer. It’s not a consumer product, but a reference platform created by folks: if you buy the parts and assemble them, then download some free software and plug in an HDMI card, it becomes an old machine. For this privilege, a person pays about $600.It gives me as much joy as I imagine anyone who likes expensive headphones or collects vintage vinyl records – the feeling that something exists more real. The kernel emulates everything, all the glitches, weirdness and timing that make a chip a chip, making the mouse move like you remember it.Watching old code run on a modern big, clear screen is overtakereal. Like Proust Madeleines, but made by Cinnabon.