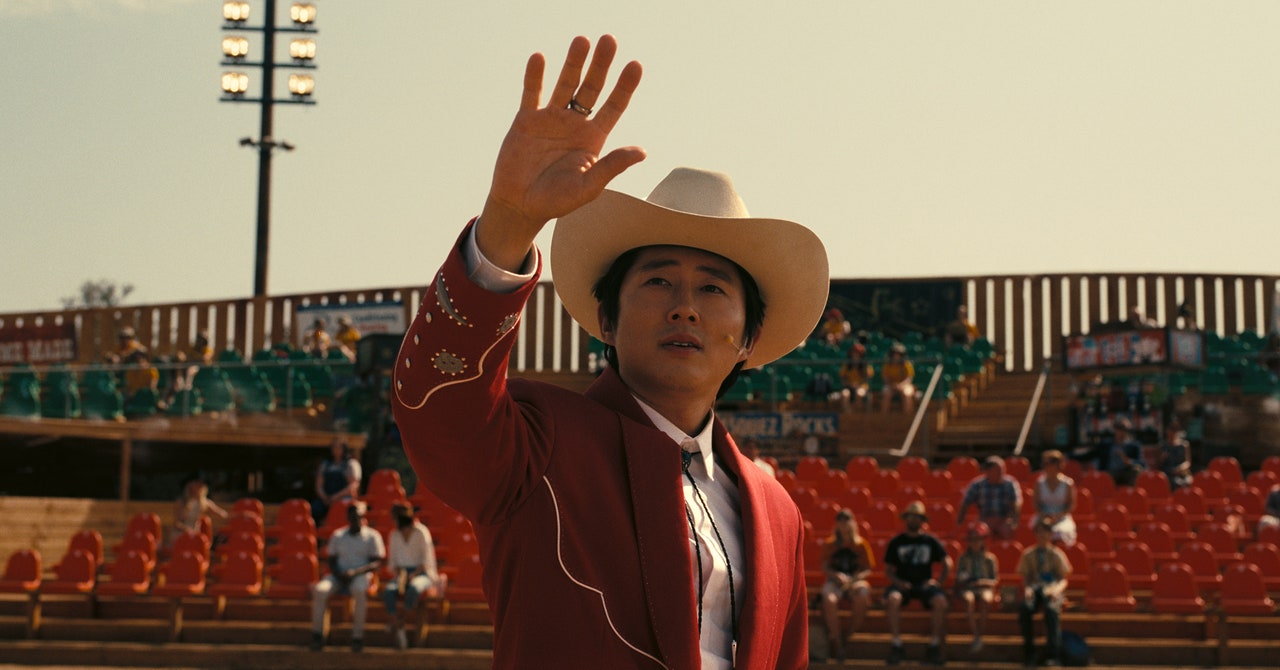 Costumes, candy, putting 12-foot skeletons in your yard—some Halloween traditions you just can’t pass up. Like, for example, parking your tush on the couch with a bag of fun-size treats and all the werewolves, vampires, and mermen you can handle. From old favorites to new classics, here are 15 of the best horror movies to put you in the Halloween spirit, all of which you can stream right now.

Of all of Jordan Peele’s intricately brilliant horror movies, Nope is probably the least horror-y. Doesn’t matter. Set against the backdrop of behind-the-scenes Hollywood, it’s the story of a brother and sister, OJ (Daniel Kaluuya) and Emerald (Keke Palmer), who are trying to keep their family business afloat. Things go sideways (don’t they always?) when a mysterious presence appears in the sky, leading them on a twisted quest to figure out just what is going on. To say much more would spoil too much, but trust us when we say you’ll be shocked at every turn.

An American Werewolf in London

Horror-comedy is not an easy genre to pull off—especially when a movie like John Landis’ An American Werewolf in London has been around for comparison for nearly 40 years. American pals David (David Naughton) and Jack (Griffin Dunne) get slightly lost as they backpack their way through England and end up being attacked by a werewolf. While Jack is torn to bits, David survives but wakes up weeks later in a London hospital with little recollection of what happened. Fortunately, his old pal Jack—looking very much worse for the wear—shows up to warn David that a full moon is coming and if he doesn’t kill himself before it arrives, he too will transform into a flesh-craving canine. Landis expertly balances laugh-out-loud humor with genuinely terrifying frights—most of them courtesy of special effects makeup wizard Rick Baker, who won a much-deserved Oscar for his work on the film (the werewolf transformation scene is iconic for a reason). Throw in a killer soundtrack and one of cinema’s most satisfyingly efficient endings and you’ve got a horror-comedy for the ages.

We’re All Going to the World’s Fair

When she reviewed it for WIRED, senior writer Kate Knibbs called this horror flick a “coming-of-age creepypasta.” It’s all that and more. Director Jane Schoenbrun’s debut feature is about a young girl named Casey (Anna Cobb), who becomes increasingly obsessed with an online role-playing game that asks players to do a series of rituals that over time summon a supernatural force that ultimately overtakes them. Less jump-scare-y than mind-bend-y, We Are All Going to the World’s Fair is the kind of horror that sits in the back of your brain, just waiting to scare you again long after the credits roll.

Jaws is to horror movies as Star Wars is to sci-fi films. It’s just hard to believe there are people out there who haven’t seen it. Still, whether you’ve never seen it or have watched it at least 100 times (Steven Soderbergh claims to have seen Jaws 28 times in theaters alone!), the story of a water-phobic police chief living on an island who sets off to sea in pursuit of a ginormous great white shark that’s killing his residents and scaring off the tourists never gets old. It’s also a masterclass in less-is-more filmmaking—even if that approach was more the result of a perpetually busted machine shark than anything else.

Bodies Bodies Bodies is, bluntly, a slasher for the TikTok generation. Beginning with a very old-school premise—a group of friends goes to a secluded house for a fun getaway—it quickly surfaces the horrors of the very online: no cell service, toxic friends. But just because it’s full of hip actors—Pete Davidson! Amandla Stenberg!—and very-now dialog doesn’t mean it won’t also freak you the hell out. And maybe even make you laugh.

One year after becoming an instant horror icon with “that scene” in Hereditary, Ari Aster applied his slow-burn approach to Midsommar, an unsettling, two-and-a-half-hour journey into a (thankfully fictional) traditional Swedish summer festival that only happens every 90 years. When a group of American college students, including not-so-happy couple Dani (Florence Pugh) and Christian (Jack Reynor), are invited to take part, what they’re imagining will be a folksy good time turns into something far more brutal and terrifying. The less you know going into Midsommar, the more effective it will be (and by “effective” we mean “disturbing”).

Night of the Living Dead

Had George A. Romero only ever cowritten and directed this one movie, his feature directorial debut, he’d still go down in history as a horror pioneer. Because even though the word zombie is never uttered in Night of the Living Dead, it’s clear to the audience that that’s what his half-living monsters are. It all kicks off when siblings Barbra (Judith O’Dea) and Johnny (Russell Streiner) pay a visit to their father’s gravesite and are subsequently attacked by a strange man. Barbra, seeing a farmhouse nearby, runs there for help—only to discover the dead body of the home’s owner—and many slow-walking creatures coming her way. That’s when the ever-resourceful Ben (Duane Jones) shows up to help. Though many critics of the time attempted to declare Night of the Living Dead DOA because of its extreme gore, its reputation as a game-changer in the genre has given it continued life, with several sequels and even a couple of remakes, including Tom Savini’s 1990’s redux, with Tony Todd in the role of Ben.

Speaking of Steven Soderbergh: As an early adopter of seemingly every new tool that comes along, he went back to his indie roots for Unsane—which he shot with an iPhone. It’s a move that could come off as totally gimmicky in a lesser filmmaker’s hands, but Soderbergh’s cinematic mastery makes it seem as if there was no better choice. Unsane’s dark composition and sometimes shaky style are a perfect complement to the story, a B-movie-esque psychological thriller in which a woman (The Crown’s Claire Foy) is involuntarily committed to a mental facility in the midst of dealing with a stalker. When she comes to believe that it’s her stalker who has set up her placement there, she begins to break down—making it hard for the audience to discern what’s real and who’s telling the truth at all.

Over the course of his near-60-year-long career, Werner Herzog has proven that there’s nothing he can’t or won’t at least try to do for the love of filmmaking (eating his own shoe included). Over the years, he has long maintained that F. W. Murnau’s original Nosferatu is the greatest film to ever come out of his native Germany. So on the very day that Bram Stoker’s Dracula entered the public domain, Herzog set about creating his own version of the film—one that, unlike the 1922 original, could legally use parts of Dracula without any legal headaches. What Herzog did, however, was create one of the most human versions of the legendary bloodsucker we’ve ever seen, as portrayed by Klaus Kinski. In Herzog’s mind, Dracula’s immortality and vampirism are burdens that make him a more sympathetic character. “He cannot choose and he cannot cease to be,” Herzog told The New York Times in 1978. If you want to expand your understanding of Dracula’s cinematic arc, pair this with a screening of Murnau’s original Nosferatu. Then take it one step further by adding to the mix with My Best Fiend, Herzog’s 1999 documentary about his tumultuous relationship with Kinski.

The Cabin in the Woods

Much like Scream before it, Drew Goddard’s The Cabin in the Woods takes a meta approach with its material, turning what could otherwise be a by-the-numbers horror movie into an immensely clever take on the “a group of attractive twentysomethings end up in a cabin in the middle of nowhere that just so happens to be surrounded by malevolent forces” sub-genre. All of the standard tropes are set up—the weird old townie who tries to warn the kids off, a creepy old basement filled with bizarre and ominous paraphernalia, etc.—though maybe they’re set up just a little too perfectly. The Cabin in the Woods is a loving wink to serious horror movie fiends and goes off in surprising directions that you’ll never see coming.

We’ve been through enough vampire crazes over the years that there are times when some moviegoers would happily agree to never see another bloodsucker in their lives. Then they remember Fright Night. Tom Holland’s iconic love letter to the golden age of horror movies and late-night television schlock jocks who entertained us with tales of blood and guts is celebrating its 35th anniversary this year. But like Jerry Dandrige (Chris Sarandon)—the glowing-eyed vampire in serious need of a manicure living next door to teenager Charley Brewster (William Ragsdale)—Fright Night doesn’t really seem to age. It still stands out as a perfectly subtle horror-comedy with just the right balance of both genres to make it as seductive as Vampire Jerry on the dance floor.

The House of the Devil

In 2002, Eli Roth’s Cabin Fever brought the horror genre back to its 1980s heyday. Ti West managed to successfully recapture that same spirit at the end of the decade with The House of the Devil, which sees a broke college student (Jocelin Donahue) in need of cash to pay her rent reluctantly agree to “babysit” an allegedly frail old lady for a few hours. You know something’s going to happen, but you’re not quite sure what: Is the house haunted? Is there someone outside stalking the babysitter? Is it all in your head? Is it all of the above? While you wait for the other shoe to inevitably drop, West takes advantage of his very clear time frame—the satanic-panic-ravaged ’80s—to showcase a treasure trove of horrifying cultural relics of the past, including one particularly high-waisted pair of jeans.

South Korean auteur Bong Joon-ho became a household name, and a force to be reckoned with, last year when he stormed the Oscars with Parasite. If that was your first introduction to his work, you should immediately seek out all of his previous films, including The Host. Like Parasite, it’s a horror movie with a social message. In this case, more of an eco-minded one where the pollution in Seoul’s Han River leads to the creation of a gigantic sea monster with a taste for humans.

Let the Right One In

Having a vampire as a BFF just might be the greatest thing a bullied kid could wish for. But the relationship that picked-on tween Oskar (Kåre Hedebrant) builds with his neighbor Eli (Lina Leandersson)—who does just happen to crave human blood—is much deeper than a simple revenge fantasy in this Swedish slow burn. In fact, Eli being a vampire is really secondary to the story. Like Werner Herzog with Nosferatu, Tomas Alfredson puts character-building first and paints Eli with a kind of sadness, which is what connects her with Oskar. Sure, it’s bloody, but it’s also kind of sweet.

The Invisible Man helped strengthen H. G. Wells’ reputation as the Father of Science Fiction when it was first published in 1897. And while it’s been adapted a number of times in the 120-plus years since, it took Leigh Whannell (the man behind Saw and the Insidious movies) to put a simple but brilliant spin on the well-worn story: a feminist edge. Instead of devoting the bulk of The Invisible Man’s screentime to the titular big bad, it’s his estranged wife (Elisabeth Moss)—who has suffered abuse at the hands of her scientist husband for too long—who turns out to be the hero. Moss turns in a great performance, as per usual, and the spectacular effects only add to this worthy—and worthwhile—update.

Story Of а Visionary Who Made Millions Happier And Richer