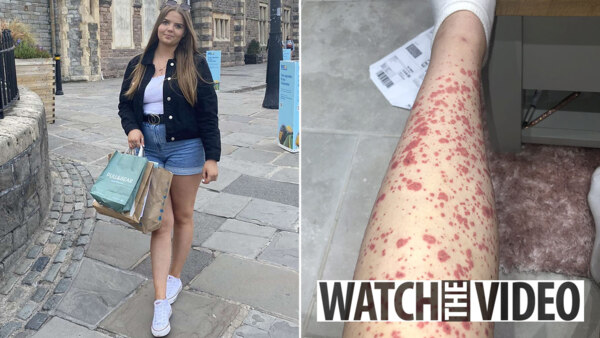 A YOUNG woman who developed a rash all over her body initially assumed she had been partying too hard.

But Ella Holley was stunned to be told the spots on her lower half had been triggered by her contraceptive pill.

A specialist told her she had experienced Henoch-Schonlein purpura (HSP), which is when small blood vessels become inflamed.

The expert said in her case this rare event was caused by the pill.

The 20-year-old student said she started taking the mini pill in October, but three days later noticed “tiny red spots” on her legs.

Ella first thought it might have been her body’s reaction to “living a typical student lifestyle”, full of alcohol, late nights and unhealthy food.

She said she had a series of “flare-ups” last October, where a painful red rash extended from her feet up to her waist, with a small amount on her arms.

Her entire legs would be covered in angry red blotches before they turned brown in colour, leaving faint marks on her skin after they faded.

Since finding out what triggered it for her, Ella has vowed to never go near the mini pill again and is keen to raise awareness of the potential side effects.

Many women use a version of contraception without any side effects, with them proven to be safe and reliable – but it’s always worth asking about side effects, looking into the options and finding the right one for you.

Most read in Women’s Health

Organon, who manufacture Cerazette – which Ella had taken, said they are confident in the research that first supported the pill and said they continue monitor the safety of the product.

Ella, of Gloucester, Gloucestershire, said: “When it first appeared I didn’t have a clue what it was.

“I was worried because with being at university I was like, ‘is it the pill that’s doing this? Is it alcohol? Is it being out in the cold after a night out maybe?’ I was just concerned about what it was.”

After spending 12 hours in hospital after the first flare up, Ella was referred by baffled doctors to a rheumatologist. She stopped taking her pill two days later.

Ella said: “It flared up and would get to its worst and then gradually start going down.

“I couldn’t really put my finger on it because it would calm down and obviously I’d stopped taking the pill at this point and then I’d go on a night out or to work for the day and it would come back in little spots.

“When it was at its worst I had joint pain in both ankles. It felt like I’d almost sprained my ankle or something.

“It felt like my skin had been set alight every time something touched it, especially in the shower and when I went to bed.”

She claims she visited the rheumatologist in January, and was told she had Henoch-Schonlein purpura (HSP) with the possibility it could return.

Ella posted about her experience online to raise awareness of the link between the condition and the pill.

She said: “I in no way want to discourage anyone else trying it, but my body’s had that reaction to it and I know there’s a chance it could potentially come back and I wouldn’t want to do that again – spend the next four months of my life covering up.

“People will always make their own final decisions but I wanted to share my experience so that people are aware, which hopefully makes them feel both more comfortable and confident in the choices they make, as I believe this is not spoken of enough.

“I’m not saying at all that this is going to happen to everyone but this is my experience, take from it or leave from it what you please.”

A spokesperson for Organon, who make the mini pill Ella was taking, said: “Nothing is more important to Organon than the safety of our products and the people who use them.

“We are confident in the research that supported the approval of Cerazette (which was first authorised in the UK in 1998) and its use in clinical practice in multiple countries around the world since its approvals.

“As with all of our products, we continually monitor the safety of Cerazette.”

Do you have a story for The Sun news desk?